8 Reasons Why You Need to See Gelada Monkeys in Ethiopia 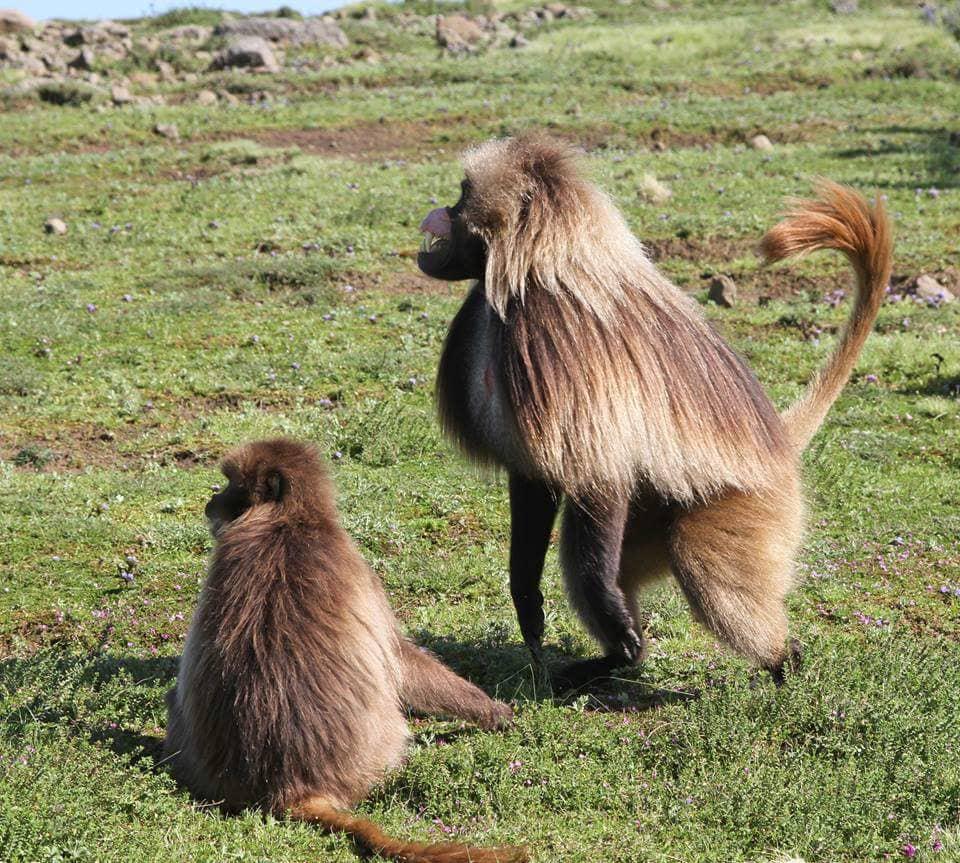 The Gelada Monkeys in Ethiopia are amazing creatures, yet only a few know about them.

When travelers come to Africa, most want to go gorilla trekking. That’s only possible in Rwanda, Uganda, and the Democratic Republic of Congo. And for those wanting to see Chimpanzees and Bonobos, you have even more choices since they’re found in several more countries.

But despite Ethiopia not having any of the great apes, it does have the Geladas.

And the Gelada Monkeys in Ethiopia are awesome! Here are 8 reasons you need to come to Ethiopia just to see them.

Gelada monkeys are nicknamed Bleeding Heart Monkeys. When you look at them, it’s obvious to see the red patches on their chests. The patches have nothing to do with their hearts. But they do have something to do with love-for the crimson patches are vital for mating.

While other primates show their sexual readiness on their bums, this wouldn’t work for Geladas since they spend all their time sitting down eating grass (keep reading below).

Instead, the edges around the red chest patch on females fill up with liquid indicating they’re ready to mate. On males, the patch turns from pink to red.

Besides these unusual red patches, Geladas always have funky large manes and naturally crimped looking 90’s hair. They are definitely as unique as they are endearingly beautiful.

Geladas are the last surviving grass-eating primates. These ancient, Old World monkeys, were once numerous. And now, only the Geladas remain. While technically characterized as omnivores, 90% of their diet is grass.

Over time, they evolved to have “extra cushion” on their bums which makes it even easier for them to sit and munch on grass all day.

3) They Live in Big Groups

Because grass is so much more prevalent than the diet of other primates, Geladas thrive in large groups. And we mean big! The largest observed was 1200! That’s partly what makes them so absolutely beautiful to behold is you don’t just spot one or two. You’re experiencing hundreds of them altogether. 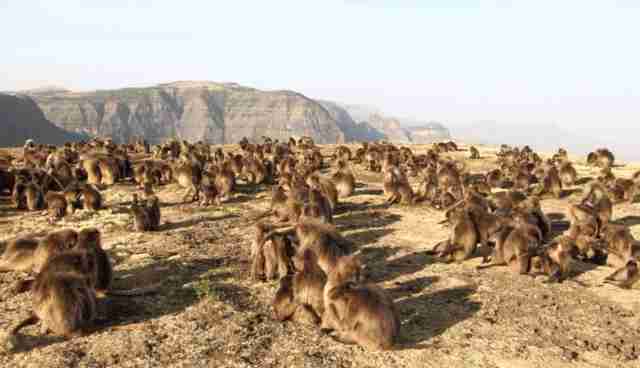 Gelada Monkeys live in groups as large as 1200! Photo Credit: The Dodo

Since they thrive in large groups, geladas constantly bump into strangers. That’s rare since most primates know everyone in their group. The Gelada Project believes the size of their groups is why they evolved to be so “chatty.” Because with hundreds of them together, a hierarchy isn’t possible. It naturally breaks down. That’s why they need more sophisticated communication means.

According to scientists, geladas make a gurgling noise that is close to human speech. In fact, their most complicated noises come after fights which quickly calms everyone down. This is also strange because most primates calm down through physical grooming. But Geladas relax after these long complex sounds are voiced– communicating to others that everything is alright.

While Geladas look like baboons, they are much more friendly to humans. They might not be jumping onto your shoulders like the Colobus monkeys will do when you’re in Awassa, Ethiopia. But you don’t need to exercise much caution when you’re around them.

In fact, most travelers enjoy sitting down on the grass beside them.

However, you should always be careful. Because if they feel attacked, their lion-sized, canine teeth are gruesomely scary. But mostly, they’re just for show. Gelada monkeys will let off a big yawn that highlights their teeth. It’s a warning sign that shows they are capable to fight, but most prefer to chill out and just munch grass. 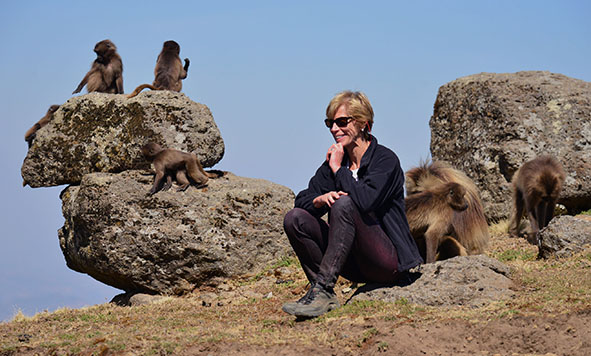 Enjoy your morning breakfast next to Geladas! Photo Credit: The Simien Mountains Lodge

6) They live in the Simien Mountains

What makes Gelada monkeys so special is that they are only found in Ethiopia. In fact, they’re mostly only found in the north of the country in the Simien Mountains.

The Simien Mountains, dubbed the Grand Canyon of Africa, is a spot worth visiting alone. But the cliffs become even more gorgeous with the hundreds of Geladas existing there as well.

Since Geladas live on these highlands, they are also very adept climbers. It’s natural for them to cuddle up together near a cliff’s edge before taking a well-deserved nap.

While Gelada Monkeys only exist today in Ethiopia, that hasn’t always been the case. Scientists have found fossils of larger Geladas throughout Africa, parts of Asia, and even Spain. But for whatever reason, they no longer survive. But now scientists are wondering how much longer the Geladas in Ethiopia will exist.

Since they thrive on eating large amounts of grass, they need plenty of land. But since Ethiopia is only twice the size of Texas with a quickly growing population of 100+ million, the land is now needed for farming and housing. This is causing heavy conflict between the geladas and humans.

About 200,000 Geladas live in the wild today. The AWF promotes two ways to help Geladas. The first is to promote alternative incomes for the community. This includings ramping up tourism so that locals aren’t dependent on farming as their only source of money.

The second includes helping empower better land planning. This allows the community to create their own goals while also ensuring that the habitat of geladas is carefully maintained. 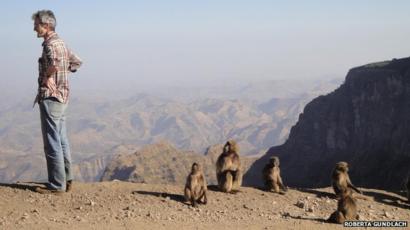 Want to visit the Simien Mountains and hang out with Geladas? Contact us today for travel information!