Religious traditions are an indivisible part of the Ethiopian culture. The Orthodox Church celebrates different festivals throughout the year: Christmas or Genna, the Epiphany or Timkat, Easter or Fasika and the discovery of the True Cross or Meskel are massively celebrated with soulful ceremonies

Being part of religious festivals is the best way to experience the Ethiopian culture since these events play an important role in Ethiopians daily life. Thus, many of our travellers try to schedule their trip to coincide with important festivals such as the Ethiopian Christmas (Timkat) or the Ethiopian New Year (Enkutatash). Most of the religious events in Ethiopia are part of the Ethiopian Orthodox Church and even though they are widely celebrated throughout the country, there are unique ceremonies held in important cities such as Timkat in Gondar, Christmas in Lalibela and Meskel in Addis Ababa. Also, the Islamic holidays are celebrated based on the lunar calendar and thus they fall at different dates each year. If you want to witness the faith of Ethiopians during their festivities, we have listed the main religious events with the possibility to be integrated into one of our itineraries.

After 43 days of fasting (known as the advent or Tsome Gahad), Ethiopians celebrate their Christmas. The Genna festivity starts in the early morning (6:00 a.m.) with people gathering in churches for the mass service culminating in a spectacular procession of the Tabot (a replica of the Ark of the Covenant) carried on the top of the priest’s head. After this ceremony, people gather at home with their relatives to feast and break their fast with typical Ethiopian food such as Doro Wat, a spicy chicken stew served with injera. Injera is a sourdough pancake-like bread and a staple food in Ethiopia. A typical local drink for Genna celebration is tej, made from honey or tell barley.. One of the most popular places to witness this holiday is Lalibela, which receives pilgrims from all over the country who gather to chant and pray around the famous rock-hewn churches during the night. 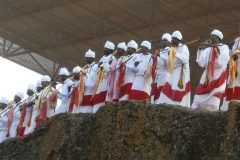 The festival of Timkat celebrates the baptism of Christ in the Jordan River by John the Baptist. It is known as one of the greatest festivals in the Ethiopian Orthodox Church. In fact, it has recently been declared intangible cultural heritage by UNESCO. The celebration starts two weeks after the Ethiopian Christmas during Ketera, the eve of Timkat, with large processions of the holy Tabot (a replica of the Ark of the Covenant) from every church to a river or pool of water where the celebration will take place the next day. The ceremony is accompanied by church choirs chanting hymns and special dances by the priests using their prayer sticks, drums, bells and trumpets. The next morning, people gather around the water to receive holy water from the church officials. The best places to attend the Timkat festival are Lalibela, Axum, Gondar or Addis Ababa. 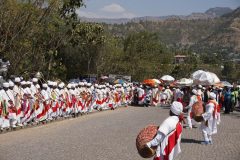 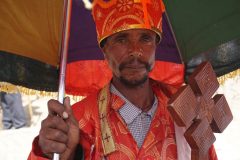 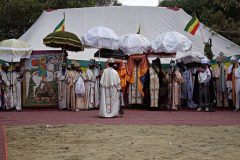 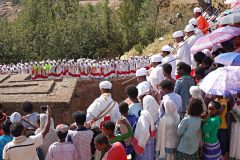 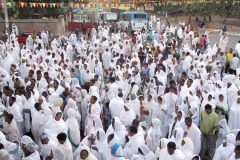 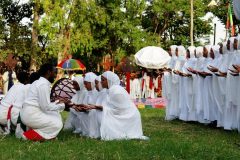 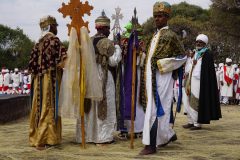 April to May: Ethiopian Easter or Fasika

A 55 day period of fasting known as Hudade or Abye Tsome concludes with the celebration of the Ethiopian Easter or Fasika. During this period of fasting, Orthodox Christians do not eat meat or dairy products and the first meal of the day is taken after 3 p.m., except on Saturdays and Sundays, where a meal is allowed after the morning mass service. On the eve of Fasika, people gather in church with candles to attend the mass service that starts at 6 p.m. and ends around 2 a.m. After the service, people go home to break the fast with chicken or lamb, accompanied with injera and traditional drinks. Like other Ethiopian religious festivals, Easter is colourfully celebrated in Axum and Lalibela.

The celebration of the New Year falls on Meskerem 1st (Ethiopian Calendar), September 11th or 12th (Gregorian Calendar depending on the leap year). It also commemorates the Feast of John the Baptist and it marks the end of the long spring rains, when the highlands are beautifully covered with wildflowers, considered as the symbol of this date. Enkutatash is a special day for children who dance and sing through the villages giving bouquets of flowers and exchanging New Year greetings. This festival is celebrated in Addis Ababa at the Raguel Church of the Entoto Mountain with a spectacular religious ceremony. 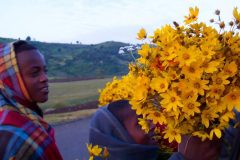 According to the legend, Queen Helena, the mother of Constantine the Great, discovered the holy cross that was used for Christ’s crucifixion. Unable to find the sepulchre, it is believed that she lit torches and prayed for assistance, when the smoke drifted towards the direction of the buried cross. She found three crosses and one of them was the True Cross. A piece of this Holy Cross was given to an Ethiopian Church, located in the highlands of Dessie. Ethiopians have been celebrating the discovery of the True Cross for centuries. One of the most popular celebrations is held in Addis Ababa, in Meskel Square, with a colourful parade followed by a mass service. When it starts to get dark, candles are lit and church leaders light a big demera or bonfire. 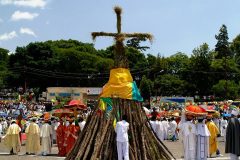 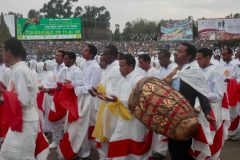 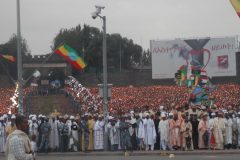 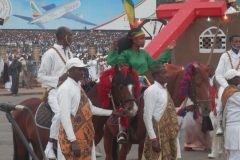 The fast of Ramadan is broken with special prayers and festivities. Fitr is derived from the word fatar meaning “breaking”. Certain Muslims believe that fitr comes from fitrat, meaning “nature” and Eid al Fitr is the celebration of God’s magnanimity in providing nature to the man. Celebrated on the first day of the new moon in Shawwal, it marks the end of Ramadan.

This religious event begins about 70 days after the end of Ramadan and it is dedicated to Abraham, who sacrificed his son Ibrahim as an act of obedience to God. This event lasts for four days.